We performed thermal imaging studies of 229 brain tumor patients with various histology during neurosurgery. We formulated principles of dynamic infrared mapping of exposed cortex and demonstrated that this approach reflects the spatial distribution of cerebral blood flow determined by autoregulation activity. This is the first detailed investigation of spatial temperature dynamics in the peritumoral area and the first assessment methodology for the autoregulation reserve of the peritumoral pial-capillary bed. A specificity of the spatiotemporal dynamics of the cortex thermal pattern in response to the developed effective cold test, depending on the degree of brain tumor malignancy grade, is proved.

Infrared (IR) mapping of the human brain relies on the fact that cerebral blood flow (CBF) is controlled by autoregulation that utilizes different mechanisms in a brain in health and disease. Brain temperature is determined by its metabolism, arterial inflow, and CBF [1]. Fundamental conceptions of brain temperature distribution are based on the understanding that it also depends on regional brain activity and neuron viability [2]. Direct measurement of intracranial temperatures is problematic; the published data, obtained by various transcranial measurement techniques, present conflicting values [3].

The intention of surgeons to save functional cortex areas explains the extensive use of intraoperative neurophysiological monitoring in brain tumor treatment. Infrared temperature measurement of exposed cerebral surface in neuro-oncological patients is gaining momentum in clinical medicine as a useful technique for obtaining information on localized cerebral blood flow [4-6 etc.]. IR radiation of exposed cortex during neurosurgical removal of brain tumors is determined by a set of factors, including the existence of a pathology site and surgical intervention. The unique nature of the arterial system of the cortex that has a surface network of vessels makes it practicable to use intraoperative thermal imaging for assessment of the functional state and compensatory autoregulation reserves of CBF. Researching thermoregulation modes of exposed cortex holds great promise for evaluating blood-flow regulatory capabilities in the peritumoral area [7].

This paper aims to develop a methodology for dynamic IR mapping to study autogerulation in exposed human cortex during neurosurgery.

In the course of methodology development some part of research was carried out using Agema Thermovision 470 Infrared Camera (Sweden) with optical resolution 140×140 operating in the 2-5 μm wavelength range, sensitivity 0,1°C, spatial resolution 1 mm with application the software IRWIN-5.21.

The camera of the thermal imager was permanently mounted on a tripod in such a way as to have a maximum view of the operating field at a perpendicular axis of sight, without interfering with the operating team and observing sterility (figure 1). The distance from the lens to the surface of the brain was from 12 to 18 cm for the efficient use of the IR receiver array. The physical size of the pixel in the space of objects varied in the range 220-289 μm. In order to avoid the heating of the surface of the brain and its glare, the shadowless operating lamp was switched off, and the surgeons stopped all manipulations in the operating field during thermal imaging. The temperature in the operating room (20-23°C) was recoded at the moment of each study.

Surgical operations were also aided by microvascular Doppler sonography using a Doplex-2500 unit (Russia), frequency 16 MHz, penetration 1-8 mm, for contact locating of brain arteries and veins of 0.3-0.8 mm dia. Cold test reactivity coefficient (for 1 and 2 min) was calculated as the ratio of the average blood flow velocities before the test and 1 and 2 minutes after it. At the preoperative stage, all brain tumor patients had a multislice CT using an Aquilion 32 scanner (TOSHIBA, Japan), 0.5 mm slice, with bolus contrast administration of 50 ml Omnipaque 350, or an MRI on a Magnetom Symphony 1.5 Т scanner (Siemens, Germany) with a head coil. CT and MRI data was manually transferred to the Stealth Station S7 (Medtronic, US) to use them during the operation. The obtained IR data were correlated with the coordinates of the pathological focal at the navigation set.

It can be seen that initial cortex temperatures depend on the tumor grade only in the pathology site projection, where the grade 4 temperature is reliably higher than that in grade 0; also observed was a sharp decline in dispersion that indicates a reduction of blood flow autoregulation. Grade 0 and 4 temperatures of the intact cortex and the peritumoral area presented no reliable difference according to the Student's t-test. It follows that stationary cortex examination presents no informative value for CBF evaluation.

A special cold test was designed to carry out functional assessment of the autoregulation reserve of the local cortex CBF: room-temperature (22±2°C) 0.9% NaCl solution was uniformly irrigated on the cortex within the trepanation window for 30 seconds followed by measuring IR emission dynamics during recovery for 2 minutes. Empirically, we arrived at a criterion for identifying intact cerebral microvascular blood flow: temperature increase of 1.8°C or more within 1 minute after test application. We take this as an indicator of good reactivity, which shows that the pial-capillary bed in the peritumoral area is relatively intact [8].

Specific features of thermal pattern dynamics are related to local CBF in the exposed cortex. IR responses to the cold test were used to classify 4 scenarios of 2-minute CBF recovery dynamics that were correlated to its 4 functional states in the peritumoral area according to microvascular Doppler sonography around the tumor.

The following variants of the 2-minute temperature dynamics in the peritumoral area were registered (figure 3):

2) Subcompensation: a persistent but significantly slower increase in temperature (recovery rate 1.6-2.1°C / min), reaching the baseline level at the end of the 2nd minute of registration - 32% of cases (n=38);

3) Decompensation: no complete recovery of cortical temperature at the end of 2nd minute was observed - 16.7% of cases (n=20);

All scenarios were matched with different brain tumor histology (table 1). In most cases, CBF showed resistance to adverse factors (pathology and surgery): 80% of 120 cases according to thermal imaging data and 74.1% according to Doppler exhibited good blood flow reactivity which indicates an intact autoregulation regardless of brain tumor grade. Frequency of disturbances was higher only in glial tumor cases (all cases, grades 1–4 [ICD-10]). This fully corresponds to the literature data on high stability and significant compensatory capabilities of the CBF autoregulation system [9].

This could not be taken as sufficient evidence of a correlation between local CBF disruption and neoplasm aggressiveness. Nonetheless, a number of phenomena have been described having to do with typical blood supply of brain tumors and their neoangiogenesis, with the role of the venous component in the functioning of the peritumoral microcirculatory bed, with brain tissue response to retraction pressure, with IR pattern dynamics in response to ventricular puncture and dissection of the dura mater, and others [10].

In a number of cases, the correction of access was available after the thermal imaging assessment of the prevalence of the tumor outside the trepanation window.

To study links between the CBF autoregulation state and brain tissue type in the change area, we analyzed thermal responses to the cold test in three exposed cortex areas (pathology site projection, peritumoral area, cortex at a distance from pathology). In 100% of cases, poststimulus IR dynamics in the intact cortex conformed to the logarithmic dependency of recovery rate on the measurement time; similar values were observed in other areas too (92.3% for the pathology site projection, 91.7% for the peritumoral area). Final cold test recovery temperatures in the three areas were as follows. In grade 0 malignancy cases: 33.39±0.25°C in the intact cortex area, 31.60±0.20°C in the pathology site projection, 33,99±0,33°C in the peritumoral area; in grade 4 malignancy cases the values were 34.29±0.24°C, 31.17±0.16°C, 32.03±0.22°C respectively.

These data, obtained without grouping of cases by the degree of malignancy, prove the high stability of CBF autoregulation. It was of interest to determine whether there is a relationship between the character of the IR dynamics in the investigated zones and the grade of brain tumors.

To qualify the relation between IR dynamics in each area and the malignancy grade, we have carried out repeated-measures-design analysis of variance (ANOVA) and evaluated significance of the following factors: cortex area and malignancy grade (0 and 4) (figure 4).

Significant malignancy grade effects relative to the temperature of exposed cortex segment regardless of individual conditions were identified from 10 to 160 s of cold test recovery {(F(30, 288)=58,464, p=0,0000} (figure 5). The effect is invariable with respect to individual conditions.

The final temperatures up to which the recovery occurred after the standardized cold test in three zones were: 33.39 ± 0.25°Cfor grade 0 in the intact cortex,31.60 ± 0.20°Cin the projection of the tumor, 33.99 ± 0.33°C in the peritumoral zone; at grade 4, respectively, 34.29 ± 0.24°C, 31.17 ± 0.16°C, and 32.03 ± 0.22°C. Accordingly, reactive hyperthermia was observed in the intact cortex area; a significant failure to reach the initial temperatures was recorded in the pathology site projection and, to a lesser extent, in the peritumoral area. In the intact cortex and peritumoral areas at grades 0 and 4, recovery differs in all 10-second intervals; in the pathology site projection, reliable difference is identified before 30 s and after 50 s (post-hoc analysis, Bonferroni correction). Further analysis of regression equations for grade 0 and 4 groups showed with 100% certainty (at low sensitivity) the reliability of differences in the free term of the equation between the intact cortex and grade 4 pathology site projection, which makes it a reasonable parameter for effective marking of cortex areas with varying blood flow in cases of more severe tumors.

Thus, dynamic IR mapping of the open segment of the human brain reflects the spatial distribution of cerebral blood flow in accordance with the activity of autoregulatory processes. The spatial-temporal dynamics of the thermal pattern of the cortical segment being open during the neurosurgical operation is specific for the degree of malignancy of the brain tumor.

The obtained results have laid an experimental foundation for developing a model of IR brain mapping to perform computer-aided analysis of IR thermal maps that can identify and classify pathologies and delineate its boundaries [11,12]. 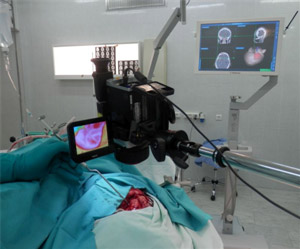 Fig. 1. Design of the experiment. Intraoperative thermal imaging when removing brain tumors: recording the original thermal image along with neuronavigation. 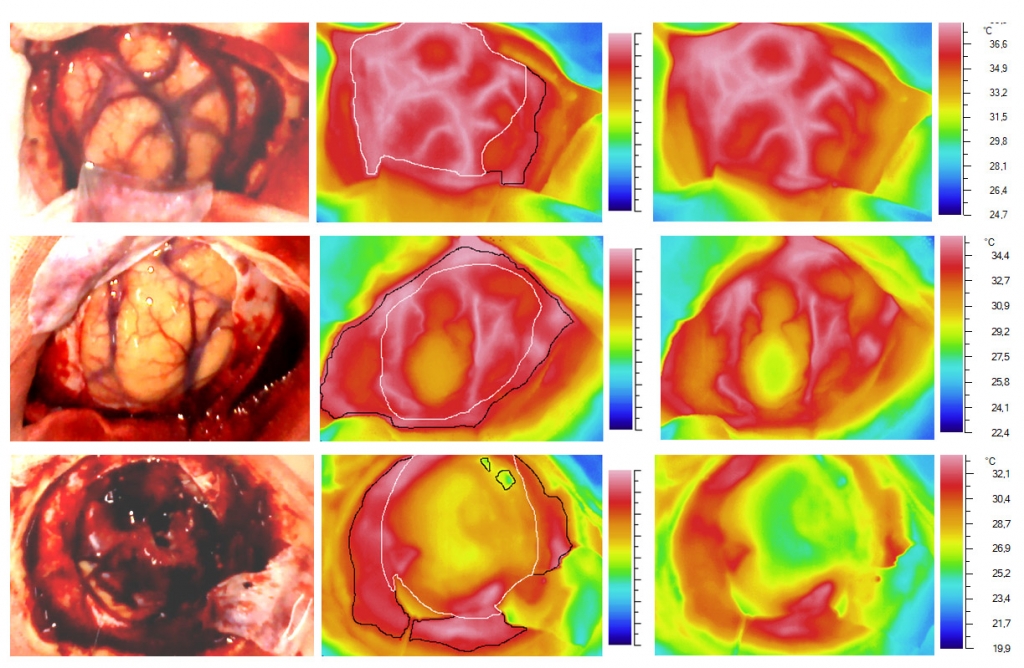 Fig. 3. Variants of the 2-minute temperature dynamics of the open cortex in response to a standardized cold test. The top row is "compensation", the middle row is "subcompensation", the lower row is "decompensation". The left column: photographs of the examined area. The middle column: the thermal images, where the white contour is the projection of the tumor on the surface of the cortex, the black contour is the "working zone" (cortex + dura mater). The right column: the temperature scale for each case. 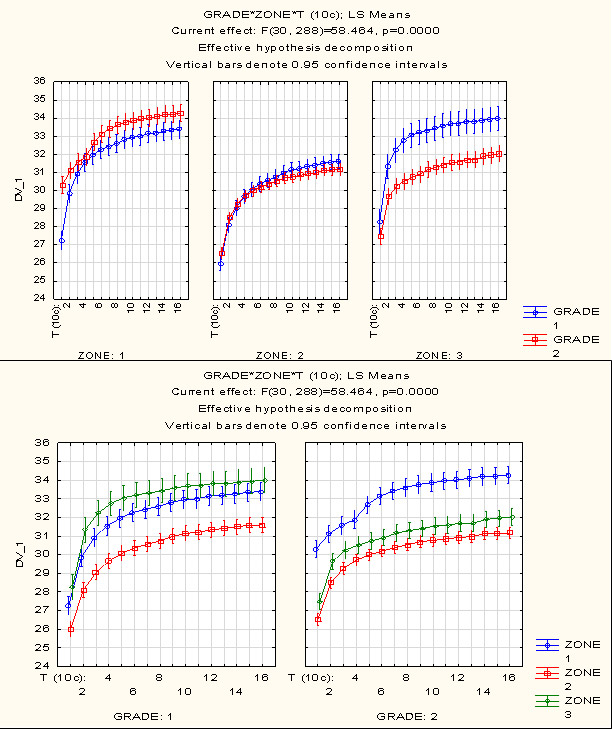